There are several models of PANTER Series baking ovens. The ovens are manufactured as operated with oil gas and electricity. All kinds of bread of any size and similar products are baked on stone ﬂoor. In order to carry out hygenic production, the stone material is specially developed and even at high temperatures, baking on this stone ﬂoor is possible. Hot gases produced in the burning cell and circulated in the gas ducts arond the baking possible leakage of the hot gases from the ducts into the chambers is prevented. The
special desing of the gas ducts and baking chambers make it possible that the temperature is the same at any point in each chamber during the baking period.
Teﬂon gaskets are placed underneath the chamber doors. Like this way, leackage of
steam from inside to outside is prevented. The steam required for thin crust and best
color formation is supplied by the steam generators. The steam amount which is
variable during the baking period can be produced by the steam generators whose
number and capacity enable to produced the maximum steam required at any moment. 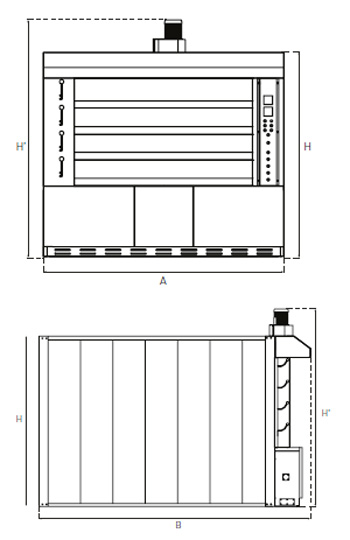